My third model with a beam is again a Grasshopper Beam Engine. This time I tried to follow a historical exemplar built by the american engineer Oliver Evans (1755-1819). This machine has an interesting but confusing history. In 1805 Evans published a book with the title “The Abortion of the Young Steam Engineer’s Guide” 1. In this book Evans described “a Steam Engine on new principles”. Simply spoken his engine was using high pressure steam. Another outstanding feature was the linear guide for the piston rod, which later became known as Evan’s linkage. There is only one drawing in the book showing the machine (Picture 1 2) : 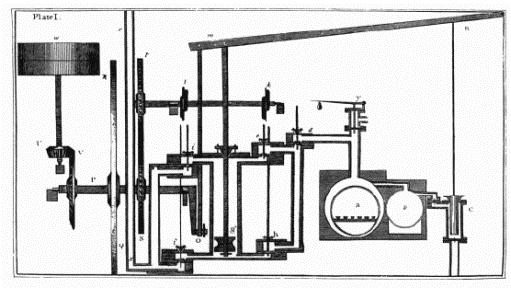 The engine was used to drive a plaster mill. You may find further details here.

Digging deeper into the history of Evan’s machines I found the term “The Columbian Engine”. This the first relevant drawing I found (Picture 2 3): 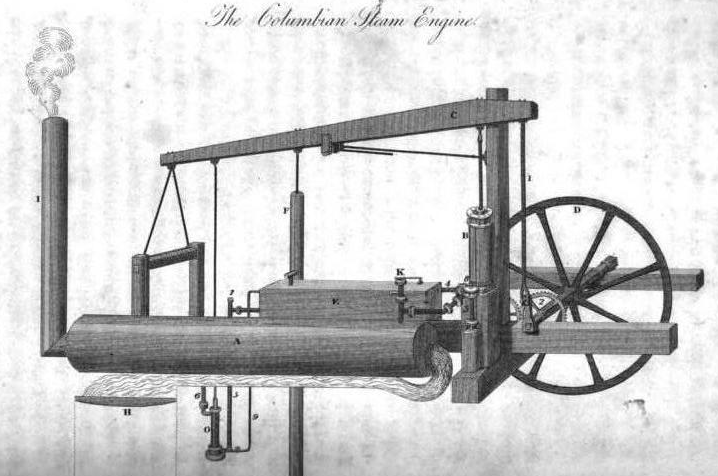 This was published in a magazine 1813. The significant difference between the two drawings is the valve gear. In Evan’s book dedicated intake and outlet valves are described, while in the magazineno such valves can be seen. Matschoss mentions Evans using a rotary valve since 1812. I think such a rotary valve can be seen on the above drawing from 1813.

Other sources mention that Oliver Evans destroyed his own plans in 1809, after a court case with the American Patent Office. Plans submitted to the Patent Office were lost 1836 in a fire 4.

So the two pictures are the only sources for the two machines, which are the first not atmospheric steam engines designed and built in the US.

I finally decided to make a model of the very first machine described by Evans in his book. In the sources this machine usually does not have a name, only two american biographers referred to it as “Drop Valve Engine” in 1935 5. So this is the name I’m going to use.

I did not find any hints about currently existing models of the “Drop Valve Engine”. So I really would appreciate any hints.

Here is a video of my model: