Again an old drawing was my starting point: 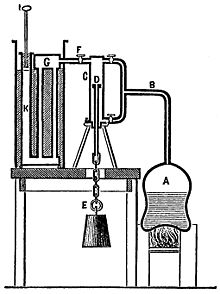 The original of this drawing is in Popular Science Monthly/Volume 12/December 1877/The Growth of the Steam-Engine II. It shows James Watt’s experimental apparatus, which he used 1765 to prove his idea of a separate condenser. Some 50 years earlier Thomas Newcomen had built his first engine (1712). It’s significant feature was a spray of water into the steam filled cylinder. Watt was working as a mechanic at the University of Glasgow and had the task to improve a model of a Newcomen engine, which did not work properly. He found out that condensing the steam in the cylinder was an important reason for the bad operation of the model.

Each steam model engineer has already experienced that making a scale model has some limitations. With reducing a dimension linear, related forces (think of pressure) will lessen square; a weight even cubical. On the other hand losses caused by radiation of heat, leakage or friction will cause more trouble to a model than to the original.

So it is really not surprising that a model of a Newcomen engine did not really work. One should be aware that the original had an efficiency factor of 0,5 % approx.

Watt’s idea was to keep the cylinder as hot as possible all the time and to let the steam rush into pipes, which were cooled by water. The condensing steam would create a partial vacuum, which would make the weight rise. Watt’s experimental apparatus proved his idea to work.

The apparatus from 1765 was the first one in a long series. It took about 10 years to build a first working engine. In my opinion the first separate condenser is one of the great ideas in the history of technology, so I started a model of Watt’s apparatus. Scale is 1:3.

Meanwhile I had a chance to test the model: